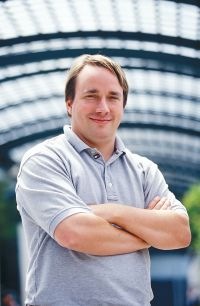 At a recent Linux conference in Melbourne, Australia, Linus Torvalds said the following about Windows Vista and Mac OS X.

“I don’t think they’re equally flawed – I think Leopard is a much better system. [But] OS X in some ways is actually worse than Windows to program for. Their file system is complete and utter crap, which is scary.”

It must be weird being the guy behind a famous open source operating system. He probably shakes his head in disbelief at the thought of people paying money for operating systems that he considers inferior to Linux.

So is he happy with anything? Yes. He likes how much Linux is showing up in UMPC and other ultraportable devices like the OLPC and the Asus Eee. He also likes that Linux has made some significant advances as far as power consumption and green computing are concerned.

And finally, he likes Google. After calling Google a “black hole” for talented programmers, he’s now impressed with its commitment to open source initiatives.