The Industry Standard—the once high-flying, and then hardest-falling, magazine of the dotcom era—is relaunching today in a public beta, nearly seven years after the original media outlet went bankrupt. It would be all too easy to write this off as a counter-indicator signaling that the current Web 2.0 mania has peaked. And perhaps that is exactly what it is. The brand carries with it so much baggage that it may be difficult to move beyond what it stands for in the collective consciousness: the excesses of Silicon Valley.

If its parent, IDG, had not bought the assets of the original Standard out of bankruptcy court for about $1 million half a dozen years ago, the site would have been called something completely different and the comparison would never be made. But they weighed that baggage against the potential boost they hope the site will get from the brand recognition the name still commands even after all of these years.

This time around, though, The Industry Standard is a Web-only property with decidedly less ambition and a new twist on generating content from its audience. The site will cover some of the same ground as its predecessor (Internet businesses, online media, venture capital). But it will focus more on analysis than news, and involve its audience in making collective predictions about industry and company trends through a prediction market set up as a simple betting pool. 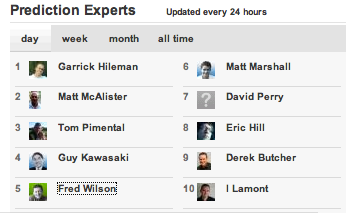 The plan is to bring in news feeds from other sources, and build a reputation for good industry analysis from regular contributors including marketing guru Guy Kawasaki, venture capitalist Fred Wilson, and blogger Matt Marshall. The site will also contract with freelance journalists to write 300-to-500-word posts on Web companies and technology topics. Each contributor will be limited to three posts a week, to make sure no one writer dominates the conversation. “It’s like the Huffington Post,” says general manager Derek Butcher, “with the key difference that we will actually pay our contributors.” Breaking news will be included too, but mostly as feeds from other sources.

The predictions aspect of the site is probably what makes it most novel. “We want great analaysis that helps re-establish the brand,” says Butcher, “but the prediction market is the pageview driver.” On the home page, there are predictions for events such as “Yahoo will accept Microsoft’s acquisition offer” or “Q1 online ad revenues will be up from 2007.” The predictions are expressed as percentage probabilities based on how many people bet each way. When you register as a member, you receive $100,000 in pretend money to bet on questions across the site. Unlike regular voting or polling, you can make your vote count more by betting more money. The readers who end up making the best predictions will see their names pop up on a leaderboard on the site.

There are plenty of other sites that also try to generate collective wisdom using prediction markets, including HubDub, Trendio, and Yahoo’s Tech Buzz Game. The problem with most of them is getting enough smart people to participate on a regular basis. The new Industry Standard is trying to crack that nut by baking the predictive betting right into the core of the site. You read a story about Microsoft’s offer for Yahoo, and then you add your own two cents by predicting what will happen. Butcher plans to soon make it easy for people to grab any prediction as a widget and put it on their own blog or Facebook page as a syndication strategy.

Whether or not anyone will pay attention to the new Industry Standard, its expert pontificators, or its readers predictions will depend on how good the analysis and predictions will be.  Insightful commentary should result in better informed predictions.  But prediction markets work best when there is something real at stake—money or reputation, generally.  When it is play money and anonymous usernames, as is the case here, my prediction is that it will be seen as nothing more than a gimmick.  Anyone care to place a bet on that? 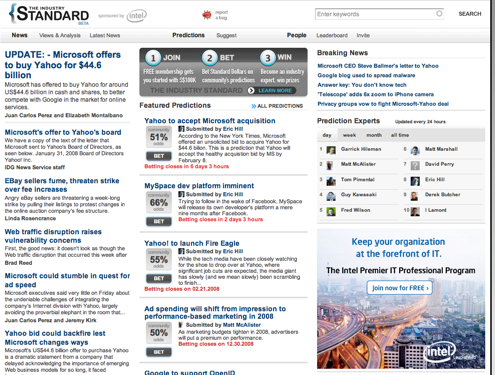