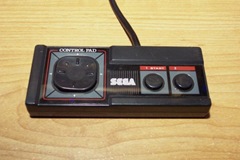 Oh how I long to be eight years old at my friend Jimmy’s house watching him beat Enduro Racer. Good times, except for the time he told his mom to shut up and she washed his mouth out with soap. He kept burping up Irish Spring and eventually I went home because it made me uncomfortable.

Anyway, we’ll start to see Sega Master System and Game Gear games on the Wii’s Virtual Console for $6 a pop. They’ll be coming out in Japan next month and, although it hasn’t been announced that they’ll be available in the US, it’d be highly unlikely that we wouldn’t see them here in the not-too-distant future.

I’ve not purchased many Virtual Console games, but I can tell you without a doubt that I’ll buy Outrun as soon as it’s available. Little known fact; The Sega Master System version of Outrun is my favorite game of all time. I can hardly wait.

Segaton: Master System games on the VC next month [NWFB]