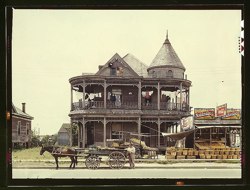 “The Commons” is a pilot project between Flickr and the Library of Congress that will tap into the Library’s rich historical footage and allow it to be viewed from Flickr. The first two sets in the pilot are American Memory: Color photographs from the Great Depression, color photographs of the Farm Security Administration-Office of War Information Collection include scenes of rural and small-town life, migrant labor, and the effects of the Great Depression and The George Grantham Bain Collection, “Photos produced and gathered by George Grantham Bain for his news photo service, including portraits and worldwide news events, but with special emphasis on life in New York City.

Flickr said that as well as bringing these historical photographs to the masses, the project will also “facilitate the collection of general knowledge about these collections, with the hope that this information can feed back into the catalogues, making them richer and easier to search,” in other words, they want to tap into Flickr users to tag these images.

The Library of Congress has more here.