To have a little fun with these figures, if Facebook is worth $15 billion, on traffic ratios alone MySpace would be worth $67.67 billion, a nice earn on the $580 million News Corp acquired the site for. Of course it doesn’t work like that, but given the gap in traffic between MySpace and Facebook, and more recently the $15 billion valuation for Facebook, MySpace would likely be worth more today that the $12 billion figure floated in June 2007.

The other notable feature from the figures is that there would appear to be causality between MySpace traffic dropping and Facebook traffic growing indicating that at least some users are switching to Facebook exclusively. Having said that though it’s not at any rate that will see Facebook become the dominant social networking site (traffic wise) in the market any time soon. 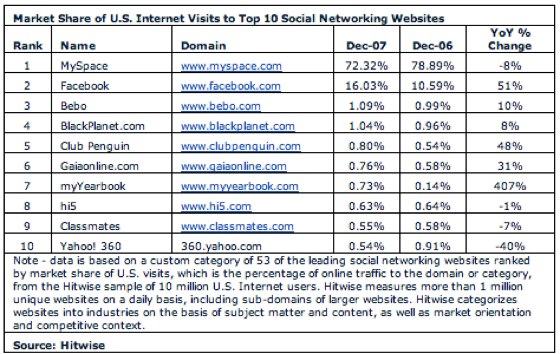