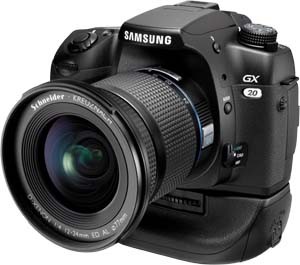 I’m totally on the fence about going to PMA only because Vegas kicked my ass this last week, but I am obsessed with cameras these days so I may bite the bullet and go. Purported images of Pentax’s refresh to their DLSR line showed up a couple weeks ago and now it seems that during the CES press release circus on Sunday revealed details of Samsung’s next DLSR, GX-20. So what does Samsung’s DSLRs have anything to do with Pentax?

Samsung’s previous DSLRs were basically rebranded Pentax rigs. And the details of the GX-20 seem to fall in line with what we heard about the Pentax K20D back in November. Well, the only thing that falls in line is the bump from a 10-megapixel sensor to a 14-megapixel sensor. The other features mentioned look to be new, like a 2.7-inch LCD, one press RAW, live preview (which would freaking kickass), ISO up to 3200, sensor-based image stabilization, weather seals and a double dust removal system on the image sensor. It seems to be legit, but manufacturers sometimes leak false details to throw everyone off. We’ll have to wait another week or so to figure out what’s real and what isn’t. Get excited!