Some new data from the Pew Research Center puts some numbers around the growing influence of the Internet on political campaigns. None of this is too surprising, but it quantifies what we already know: that the Internet is becoming more important in political campaigns, especially among younger people. Each election, teh Internet grows stronger and stronger. This data suggests that in 2008 the Internet may still not be the deciding medium in the election, but it certainly points to that being the case in 2012. Here are some tables from the report, which is based on a survey of 1,430 adults in the U.S.

Nearly a quarter of the population say they “regularly” learn something about the presidential campaigns from the Internet, up from 13 percent in 2004. the Internet is still trailing TV news and daily newspapers, but is now beating morning TV shows and radio: 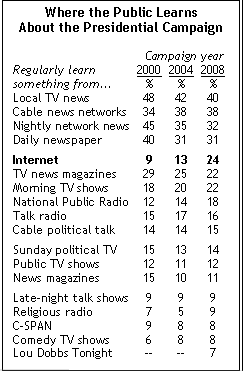 Those numbers change if you look at the same question by the age of the respondents. A full 42 percent of 18-to-29-year-olds (double the amount from the last election) regularly get their campaign news from the Internet, handily beating all other sources including cable news (35 percent)nightly network news (24 percent) and daily newspapers (25 percent). In the 30-t0-49-year-old age bracket that number drops to 26 percent, below cable news and nightly news and tying daily newspapers. If this trend continues, the Internet will be the deciding factor by the 2012 election: 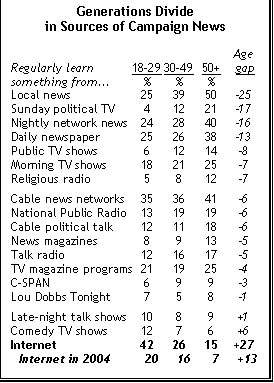 When asked where do they get most of their campaign news from (as opposed to regularly), TV still dominates among 18-to-29-year-olds, although it is losing ground fast: 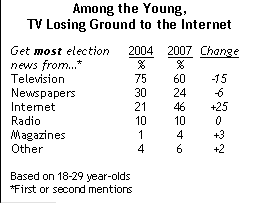 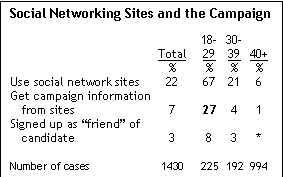 Here are the top sources of online campaign news for all ages. MSNBC.com, CNN.com, and Yahoo News top the list, with more than 20 percent each, and then it trails off after that (Google News is a distant fourth with 9 percent and the New York Times is seventh with 6 percent):