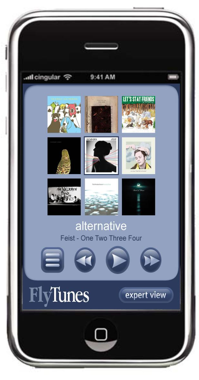 A new service called FlyTunes and announced today at CES in Las Vegas will make it easy to play internet radio on your iPhone or other cellular/wifi-enabled device.

The free, ad-supported service won’t be released until January 21st (you’ll be able to get it here as a download…not sure how that’s supposed to work for the iPhone; looks like it will need to be hacked). But it’s already being touted as a challenge to satellite radio, which costs a significant amount of money, requires special hardware, and provides a more limited range of channels than can be found on the net.

FlyTunes will serve up audio content from the thousands of internet radio stations on the web and tailor its selection to your preferences (you can tag favorite songs or songs that you never want to hear again). The service will pre-cache a default of 30 minutes of content from a particular station, with more caching available when you think you might lose cell service while traveling. The company claims that caching 30 minutes of music will only take just over a minute, although this speed strikes me as only possible for 3G-enabled phones, not EDGE-enabled phones like the iPhone . This caching will also allow you to rewind and fast forward through a station.

Since the service will be free, FlyTunes plans on delivering targeted advertising along the lines of Google AdSense. It’s unclear whether the company intends to display ads visually or deliver audibly, or both. In whichever case, it has characterized its advertising possibilities as providing a viable business model for internet radio.

Now if only Rhapsody and other streaming music services would work with the iPhone as well, I would be much closer to never needing to purchase music tracks ever again.

Update: We’ve embedded a video demonstration of FlyTunes below. Looks like it’s actually Safari-based and won’t require any hacking. The demo doesn’t show how well music loads over EDGE, just Wi-Fi, so it’s yet to be seen how practical it is on the go.