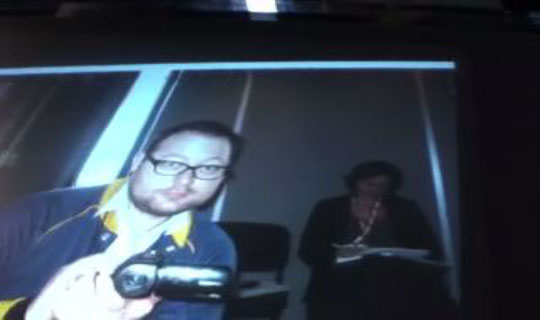 Not to brag, but I just spent a half hour with Pete from Microsoft and his fantastic Surface device. I’ll be the first to admit that when Surface was first announced I kind of turned my nose up at it. A table with multitouch? Pshaw!

But after having seen what it’s capable of, and especially having seen what’s in the video below, I’m more than impressed. Surface isn’t a device, Surface is a technology, and that’s how we have to think of it. What we’ve seen in the demos is just the stuff it’s doing at launch, which should be this spring. The point is, it’s a new technology and there’s a lot of places that it can go. This type of new hotness guarantees brainstorming. Just watch the wine shop demo part of the video after the jump and tell me you can’t think of amazing things it can do. And do watch it, you’ll be glad you did.

That wine demo is new, we’re the first to bring it to you. I must say that the fact that the Surface doesn’t use any touchscreen is genius; interactive is great, but if it’s fragile then it becomes hard to integrate into your life. The Surface uses infrared to track up to 51 touch points, and is spill proof as well as impact resistant. When something is sturdy, you get that whole reliability thing involved, and then you can start using it without really having to think about it, key to something like this becoming a granted part of life.

Watch the demo, we think you’ll be impressed. The surface was a delight to use, and we look forward to bringing you more news and later more exclusive coverage of this emerging B2B technology that’s destined to make it’s way into your home as a P2P technology. With the way Surface interacts with everything else around it, and the way that it can all be linked together via XML, it seems as if Microsoft might have just invented something from the Jetsons.