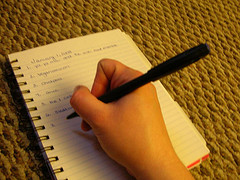 Okay, I know, I’m late with these, but coming up with New Year’s resolutions is tough. And isn’t there a one-week grace period anyway? Rather than do predictions, I thought I’d offer up some resolutions—things I’d like to see happen this year. These aren’t my resolutions. These are resolutions that tech companies like Google, Apple, Amazon, and Facebook should adopt, IMHO. (And, no, they are not capable of coming up with their own resolutions. Someone has to do this for them). If you have better resolutions to suggest for these or any other company, please add them to comments.

Apple—Learn to Let Go. Don’t repeat the mistakes of history. Open up a little bit. You are helping to bring the phone and other mobile devices into the digital age. Other people and companies want to be a part of that too. Make it easy for them to build apps on top of the iPhone and your other products. (You’ve indicated that you are working on this, but we are still waiting to see the results). Command and control got you this far, but in a world where every device is connected, a bunker mentality will limit your growth.

Facebook—Stop Being a Party Hog. Release my friends and leave Scobie alone. You want everyone to create applications for Facebook, but when it comes to letting people take data out of Facebook you are not so generous. Find a way to let members take their social graph (their list of friends and social connections) with them to other Websites. If you are serious about becoming the social operating system of the Web, you need to let people party the way they want to, and where they want to (even if that is not on Facebook). Embrace this change. You’ll still be popular. The alternative is to battle a growing user backlash (and startups looking for workarounds).

Google—Go Beyond PageRank. The main way you sort search results, PageRank, is more than a decade old. It is the basis of the entire search economy. But it is also starting to be gamed in ways that threaten to dilute the value of your search results. People are buying and selling links on Web pages with the express intent of manipulating search results. You can fight this, and you are, but maybe it is time to start shifting to other ways to rank search results. There are other sources of authority on the Web besides links, aren’t there? (Don’t ask me what they are—you are the one with all the genius employees).

Amazon—Open Up The Kindle. Your Kindle Reader is a big step forward in terms of gaining mainstream acceptance for electronic books. But what is great about the Kindle is the service, not the device. It is your 90,000-and-growing titles in e-book format, seamless wireless downloading, and back-end billing linked to existing Amazon accounts that makes the Kindle worth replicating. Put out a reference design and let other companies make sleeker electronic readers that tie into the Amazon store. The design of the device itself is clunky. Stick to what you know, and let other companies build the hardware.

Microsoft—Get Serious About Webtop Apps. Productivity apps are moving to the Web, and while that threatens your Office franchise, you need to get in front of this trend now before it gains much traction. You are inching towards this with your recent Office Live Workspace beta, but you still need to get past your Barbarians at the Gate mindset. While Google, Adobe, and others try to figure out how to bring their Web-based word processors, spreadsheets, and presentation software offline, you are already did that a long time ago with Office. Now you are integrating Office apps with Office Live, but you are trying to force people to use the offline apps as their default environment. Keep that as an option, but let people create documents and spreadsheets online as well without the need to ever launch Office on their desktop.

Yahoo— Use The Traffic, Luke. I don’t know what to tell you guys (and gals). You are losing more executives than Google, Jerry Yang’s first 100 days were uneventful, and still nobody knows what your strategy is supposed to be. Your biggest asset is that you still attract more traffic than any other site in the U.S. (although Google is gaining on you). For the most part, you like to slosh that traffic around Yahoo, but you’ve shown signs that you are willing to turn that hose towards other worthy Websites, even if they have no pre-existing deals with you. Find more ways to spread that traffic and to get other Websites to return the love. Then use that natural traffic network to lure other Websites into your advertising network. Focus on dominating the growing behavioral ad-targeting market instead of trying to beat Google head-to-head on contextual and search ads.

eBay—Sell Skype. Come on, you know you want to. It was a bad fit from the start.