Just a day after video-sharing site Veoh added a TV tab with shows from Hulu and CBS, Microsoft did the same thing with the launch of a new MSN Video Guide. (This is really just a new user interface to showcase this content). It too has a TV tab with full-length episodes from Hulu (Fox and NBC Universal shows), as well as CBS. Similar to Veoh, the shows range from Battlestar Galactica, CSI, 24, The Office, and The Simpsons to classics like the A-Team and Miami Vice. All the shows can be watched in an embeddable player on MSN Video.

It looks like becoming a hyper-aggregator of video is becoming hyper-popular, and won’t necessarily be a point of differentiation. Meanwhile, Hulu’s focus on getting hyper-distribution of its videos on other Websites first, and launching its own public Website second looks to be paying off already. Everyone wants to distribute those NBC and Fox videos. 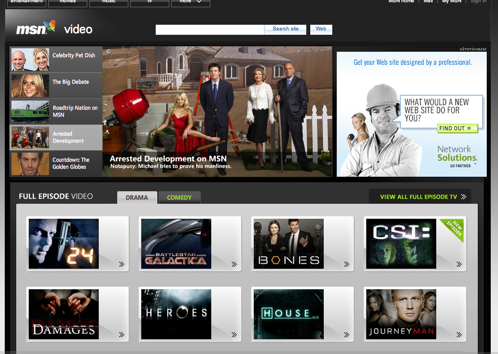