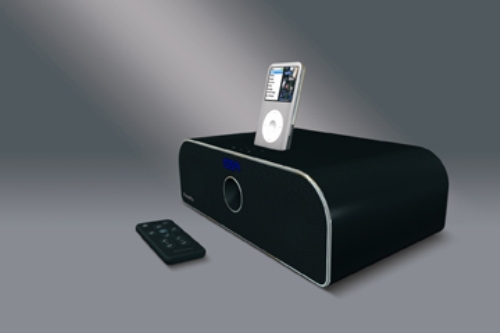 One booth we’re going to be sure to stop by next week at CES is that of iPod accessory makers iLuv, who today, to beat the CES rush, launched a pair of new iPod combo docks that will be available in March.

The i1255 is a combo iPod dock/DVD player. While it’s not for everyone, it’s a good solution for those wanting to keep their video connections in their home theater to a minimum.

And onscreen menu and included remote let you control the fairly standard DVD player, as well as content — both audio and video — from the iPod. It’s a pretty unique, though simple solution for those who want to include their iPod in their home stereo scheme, and at only $129 MSRP, it’s a great all around DVD player to look at if you’re in the market and want a little something extra. We wish it was Blu-Ray or HD-DVD, but there’s a whole year to go.

The i399 is what the iPod Hi-Fi should have been in every way. It’s similar to Apple’s offering, except that it also includes stereo Bluetooth, meaning that besides iPod, you can stream music from your stereo Bluetooth-compatible phone, or to stereo Bluetooth headphones for wireless “jammin'”. It’s a bit pricey at $229, but there’s not much else on the market like it, so it’s understandable.

We’ll try to get hands-on with both devices at CES in the next few days, so keep your browser, er, tuned here.