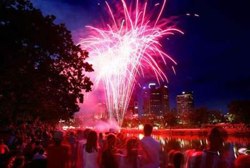 Another year has passed us all, and 2008 beckons tomorrow. For those not out and about this New Years Eve, here’s a few places you can join the experience online:

Sites such as Ustream, Kyte, Justin.tv and others will have many users live stream the new year from where ever they are.

Twitter will provide a rolling text version on NYE around the world. The first off the mark are two new Twitter friends I met today, Eli and n8duke, who are both located in Antarctica.

I did a brief interview today with Eli, one of the two most remote Twitter users on the planet:

how long have you been down there?

I’ve been living (and working) at McMurdo Station (on Ross Island) for 3 months, and I’ve got about 6 more weeks to go before the end of the summer season.

my first tweet was posted on 07/07/07 and i’ve really loved it from the very beginning.

Do you find Twitter helps narrow the distance to the rest of the world?

definitely. i have friends all over the planet (US, Europe, etc) using twitter right now and it makes it so easy to stay in touch. it is especially helpful for me down here because the internet connection is pretty terrible, so it’s nice to just hope on to twitter, type a few characters, and be done with it.

What are you doing for new years eve? will you be watching others on the net?

well, it’s 10:45pm on new years eve for me right now, so in a few minutes i’m going to suit up in me ECW (extreme cold weather) gear and hike to the top of Observation Hill with some friends. there’s about 6 inches of snow on the ground (in the summer!) and it’s still snowing. we’re going to bring in the new year in true antarctic fashion!

Earthcam is streaming NY NYE live, -5 GMT. MSN is promising a live NYE feed as well, but just don’t try to open the link on a Mac, or not in IE…ouch.

If anyone else has some NYE live links let us know in the comments.