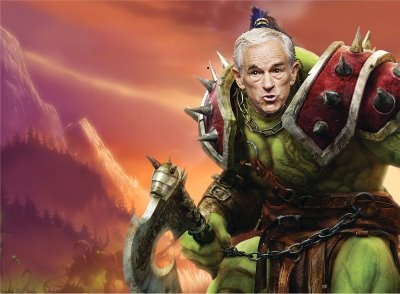 Like World of Warcraft? Like Ron Paul? Happy day, then! On New Years Day, supporters of everyone’s favorite libertarian will march from Iron Forge to Stormwind on the Whisperwind server. Supporters have even formed a guild called RP Revolution, complete with their own Web site.

I can see why people would be averse to politics “invading” their favorite games, but, right now, it’s just a bunch of like-minded guys do a little walking, doing a little slash-yell-ing. I don’t see anything particularly harmful with that. If I’m not completely hung over on NYD, I’ll swing by and grab some screen shots.

In related WoW news, if anyone is still on Anetheron, my level 45 character could use a decent one-handed sword (or two). Feel free to e-mail (nicholas at crunchgear dot com what) me IRL with any potential offers.