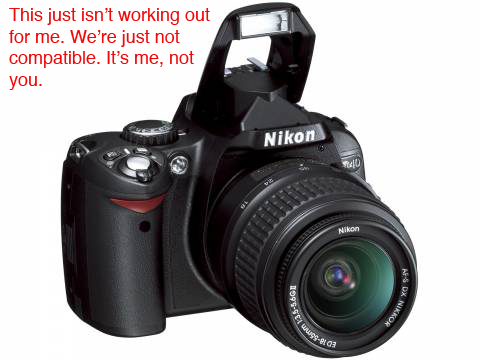 Nikon’s D40x, 10-megapixel version of the D40 released inexplicably only four months after the D40, is set to be replaced by the new D60 line. There aren’t a lot of details, but considering the price point and previous capabilities of their cameras along that line, you can probably expect a perfectly decent camera crippled by its lack of autofocus support for much of Nikon’s extensive lens collection.

I’ve advised friends and family against buying a D40 due to this shortcoming, as I feel Nikon’s strength is in its excellent lens selection, and buying a camera that effectively ignores 30 years of great lenses seems a bad call. That said, the D70 is still a nice camera although it has been eclipsed by offerings by Canon and Pentax in that zone and performance point.