Any parent knows how hard picking a name for a baby can be. The Web makes it easier to research names, but the majority of baby-naming sites simply overwhelm you with too many choices. You can check out the most popular baby names in the U.S., map those names around the world, look to celebrity baby names for inspiration, or even graph a given name’s popularity over time. My wife and I have gone through this exercise twice with our own three-year-old and one-year old boys (Sebastien and Emile). All I remember from the process is scrolling through endless, brain-numbing, alphabetical lists that made one name seem indistinguishable from the next. We ended up going offline for our final inspiration.

A better approach is a site called Nymbler. You type in names that you like but aren’t quite perfect enough, and it suggests a bunch of similar names based on origin, sound, meaning, and overall style (as defined by baby-naming expert Laura Wattenberg). Then you can refine your search further by indicating whether you love or hate each suggestion. Maybe you like some of the currently in vogue names for girls (Madison, Sophia, Emma, Olivia), but want something more distinctive. Nymbler spits out Madeleine, Ivy, Angelina, and a dozen others. Some of them are awful, but keep clicking through and you are likely to find a few gems to put on your list of finalists. 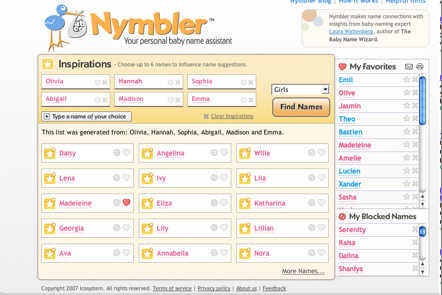 Turns out you are having a boy instead, but you only came up with a list of girl names? No problem, Nymbler can make connections between names of either gender. For the same list of popular girl names above, Nymbler comes up with Silas, Jasper, Theo, and Pierce. 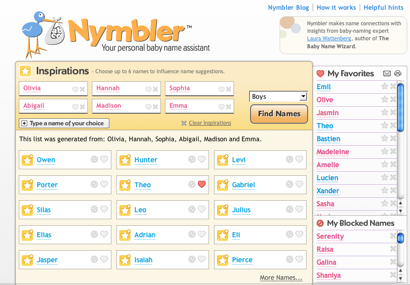 What makes Nymbler interesting, though, is that it is just a demo for search and discovery technology called a Hunch Engine that was developed by Icosystem. Founded by complexity scientist Eric Bonabeau, Icosystem is a Boston-based consulting firm with about 25 people, about $4 million in revenues, and is nicely profitable. It’s main bread and butter comes from helping Fortune 500 companies like Eli Lilly with drug discovery or Harrah’s Casinos with data mining consumer behavior. But Bonabeau recently told me that he plans on transitioning Icosystem’s business in 2008 towards more of a software model by taking some of his custom algorithms and turning them into more generic software that is easier to deploy.

His Hunch Engine uses behavioral clustering to make personalized suggestions based on no more than two or three clicks by a user. “How can I help you make better decisions, especially when you don’t know what you are looking for?” asks Bonabeau. That is the goal of the technology. And it can be applied not just to baby names, but to image search, shopping suggestions, drug discovery, or any other data-mining task.

For instance, Bonabeau showed me another Hunch Engine demo for a photo editing application. It took a fuzzy, dark photo and then displayed a grid showing different editing enhancements. With a couple clicks, what was a throw-away image became legible without the user having to know anything about photo-editing. This could come in handy as a user interface for mobile devices, especially camera phones that tend to take crappy pictures. We’ll be keeping an eye on Icosystems to see what Hunch Engine apps pop up in 2008.