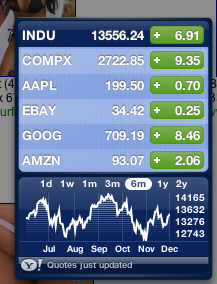 A minor update to Hickey’s “Apple shares hit $200” post from the other day: Apple is now the third most valuable technology company, right behind Microsoft and Google. Its market capitalization (yes, I had to look up what that means) is now around $174 billion, some $100 billion more than last year. And to think I got excited when Grandma sent me $50 for Christmas.

Keep in mind that it’s only going to get harder for Apple as it moves away from 100 percent dependence on the iPod (where it had nearly zero competition) to more of a focus on the iPhone (where the carriers truly run the show, at least here in the U.S.), as Fast Company pointed out this month.