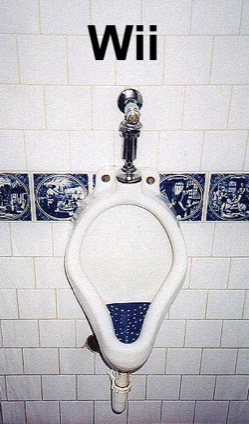 I love it when fanbois try to attack their most prized possession. This softball at all things Wii complains about scarcity, storage, and poor graphics while couching the criticism in the same “I love him but he beats me” language found on Cops.

The A+ titles out are of such a high caliber, it’s hard to get into a glass-half-empty train of thought. But it’s not all lollipops and gumdrops, and the Wii has a lot of room for improvement.

It’s not all lollipops and gumdrops, is it. It’s mostly derivative platformers involving infantile characters and party games that require hours of intense, convoluted gameplay. It’s apropos-of-nothing storylines, poor graphics, bad controls, and a sports game that only the geriatric or DDR lovers can really get into. It’s popular because parents feel they can get their kids a Wii and it won’t scar them for life but it will scar them: the kids will be so frustrated playing Elebits they’ll realize God is dead.

Revolutionary: 10 Things I Hate About Wii