Boston-based uTest has raised $1.7M to bring to market a crowd-sourced quality assurance (QA) marketplace and community. The service has begun recruiting testers in anticipation of its official launch, expected in early 2008.

The company’s founders recognized that QA and usability testing solutions are inefficient. QA departments are either under-utilized when waiting for versions to test, or over-extended when a new version comes out. To most SMBs, QA outsourcing is neither cost effective nor available “on-demand”. Then, of course, there are cost-cutting measures that leave companies unable to sufficiently fund QA efforts, ultimately shipping buggy applications to users like us.

The uTest testing platform itself is entirely Web-based and provides the management of complete QA cycles, from creating/loading test scripts, to selecting the target community (profile and environment) of testers required. The platform also provides test case management tools, real-time information on bugs and defects logged, statistical information on release maturity level, as well as QA coverage and market readiness. Support for bug tracking systems includes Bugzilla, Jira, FogBugs and will be expanded over time. 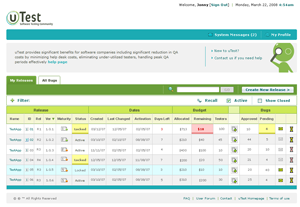 In a smart business move, uTest will not charge companies to use their platform to manage testing and QA cycles—this will be entirely free of charge. uTest will only charge for the services provided by the community of testers.

The uTest offering makes a lot of sense to me and I expect it will be warmly embraced for several reasons. First, consider for a moment that for many SMBs, QA management solutions such as those offered by Mercury or IBM-Rational are beyond their reach. Speaking from personal experience, the majority of the testing cycles I’ve seen have been “managed” on Word or Excel. The “on-demand” model which has been proven time and time again on the Web from CRM to ERP, should work just as well for QA. The fact that the platform will be offered free of charge, pushes the offering to “no-brainer land”.

Second, beyond the manageability aspects of uTest’s service, companies will obviously enjoy the cost saving aspects of paying testers by the bug. It’s this aspect that in my opinion will make uTest’s offering relevant not only to SMBs but to large organizations as well. Logic would dictate that if they embraced off-shoring and near-shoring, crowd-sourced QA shouldn’t be too jagged of a pill to swallow.

Third, recruiting a userbase of testers should not be difficult. There are droves of potential testers in countries such as India, China, Russia, Bulgaria, Estonia, etc. Also, getting hired through sites like oDesk, Elance and RentACoder is becoming increasingly difficult due to the growing number of service providers. These same individuals can theoretically provide testing services instead of programming.

All-in-all uTest sounds quite promising and has earned a place on my companies to watch in 2008 list.