Live video streaming on the desktop may be just taking off in the U.S., but overseas this is already becoming a mobile phenomenon. Yesterday Mike Butcher of TechCrunch UK posted on Qik and its live video streaming service. Well it looks like Qik will be able to enjoy few precious moments of blogosphere sunshine because a young Israeli company named FlixWagon is hot on its heals.

Let’s start with the bad… FlixWagon has a terrible name, and has an equally ineffective logo to boot. Neither name nor logo help in communicating the company’s true offering: Allowing anyone with a 3G/WiFi mobile phone to broadcast live video directly to the Web. No wagons are involved in the process.

The good news is that FlixWagon’s technology is far superior to its branding. The most important aspect of a cell-to-web offering is wide support of mobile handsets. FlixWagon supports most Nokia and Sony Ericsson handsets. The mobile client application, which users must download, is 76Kb for Symbian and 218Kb for J2ME phones. FlixWagon executives are confident this covers the gross majority of GSM handsets. 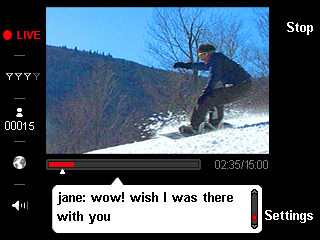 The mobile app is designed simply but effectively in order to provide users the shortest path to broadcast. It’s not mandatory, but users can edit video properties from their phone, such as title, tags, category, and access rights (public or private). The mobile app also provides live feedback from viewers (see the screenshot on the left).

Second to handset support in importance is video quality. I had a chance to see FlixWagon in action on a few occasions and was impressed by video that came out on the Web clearer than I expected. I also saw videos uploaded using the same mobile handset to both Qik and FlixWagon. Subjectively speaking, I felt that FlixWagon was superior. This was true both in video clarity and its ability to deal with movement—quality was degraded substantially on Qik when the handset was moved even slightly. FlixWagon is claiming that this is due to the emphasis it places on ensuring that a user never loses a second of broadcast, even in the most challenging conditions inherent to mobile environments. For example, if a user goes into an elevator, basement, or loses reception for any reason, the broadcast will resume when reception is back and the full video will be stored and available for later viewing.

FlixWagon.com acts as the service’s portal, allowing site visitors to browse through live and stored broadcasts. Social aspects include broadcast alerts to friends and family and auto-uploading to video and social sites like YouTube and Facebook.

FlixWagon has partnered with MTV Israel to enable reporters and subscribers to broadcast live video from their mobile phones directly into a social network to be launched within mtv.co.il. (See also what MTV Israel is doing with regular Web video). I wouldn’t be surprised to see FlixWagon integrated across MTV’s global Websites sooner rather than later.

FlixWagon will be giving TechCrunch readers priority access when it launches its Alpha in January. Sign-up here.