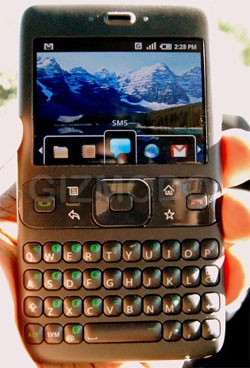 Gizmodo has got their hands on a photograph (pic right) of a prototype phone running Google’s Android Open Mobile operating system. According to the report, the phone itself looks like it may have been manufactured by HTC.

What it means: The OS obviously works already, and this looks like a closed testing round to iron out the bugs, so there’s a good chance that Android is getting close to a broad scale release. The original reports said second half of 2008, it could be sooner.

The bad side: the handset. The original demo video showed a handset that was closer to an iPhone (although with keyboard) than a Blackberry, complete with touch screen interface, where as this…well if you like the aesthetics of a Blackberry it’s probably not that bad; Google is creating an OS that will be used on many phones, so we’re likely to see nicer handsets than this. Lets hope that in this case looks are deceiving, otherwise Scoble will be right, and we cant have that :-)