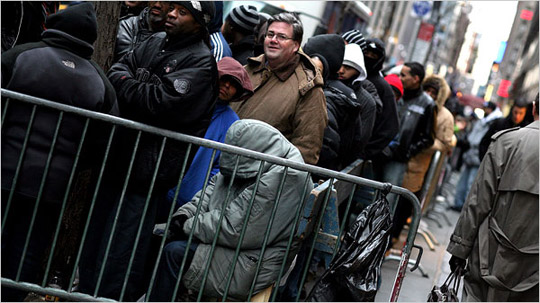 How long until the shortage of the Wii starts to negatively affect Nintendo? That’s the idea of this one Times piece, which does the usual interviewing people who want a Wii but just can’t find one. Grown adults, snot-nosed kids, you know the drill—the Wii crosses demographic lines unlike any other video game console (or toy, for that matter) before it. Too bad no one can buy it.

Some analysts think that Nintendo is artificially keeping the supply down so as to ensure the console’s “buzz” for some time. If that’s the case, not only is Nintendo losing money (estimated to be around $1 billion) in the short term, but those selfsame analysts think that it could be upsetting those potential customers to the point that they’ll skip the Wii and Nintendo altogether.

I know one thing: my little brother has wanted a Wii since last Christmas, and if he doesn’t get it this year he could well burn the Christmas tree in protest.