This has to be the most amusing website I’ve come across for quite sometime. Mod My Life is a twist on the lifecasting idea pioneered by JustinTV. Whereas with JustinTV you can eavesdrop into the lives of dozens of people, and chat with them if you like as well, Mod My Life lets you to watch people’s lives for hour-long segments at a time and command them to do things.

The word “lives” should be put in quotes because these are actually performers (actors, improve artists, comedians, etc.) who have volunteered to give up control of their behavior to an internet audience. The site has been out as public beta since launching at the NY Video Meetup this past Monday, although currently they hold only one or two sessions, or modcasts, per day. The next will transpire at 8pm ET tonight. 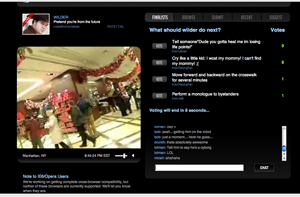 I sat in on a modcast yesterday evening and was very impressed by the modstars’ intent on carrying out their instructions faithfully. I first watched a guy named Wilder roam a crowded mall and undertake the antics suggested to him by the handful of spectators on the site. Soon after submitting “do the robot”, there he was on my screen doing the robot in real time and around real people who had no clue he was being controlled by the internet. Among other submitted instructions were “tell someone ‘dude you gotta heal me, I’m losing life points!'” and “cry like a little kid: I wost my mommy! I can’t find my mommy!”. The organizers of Mod My Life relayed the top suggestions to the modstar every few minutes via cell phone, and we could watch him carry the instructions out in both first-person and third-person camera views.

The second modstar, named Micah, walked the streets of New York City trying to get strangers to sing with him, a street vendor to sell his entire street-side store, and a cab driver to take him only one block down the road. We’ve embedded a video segment of his modcast below where he asks strangers to rate him on a scale of 1-10.

Co-founder Andrew Keidel says that the site currently has 20 recurring modstars and about 100 people from a variety of countries interested in performing, currently for free but in the future with compensation. He foresees increasing the number of modcasts per day, as well as the number of locations. The most visitors to the site at one time has been 50 but they’ve built the site with an eye for scalability, so they hope to host potentially thousands of spectators at a time. Future features will include an archive section for past modcasts, various types of embeds (for recorded clips and for watching live performances elsewhere on the web), profile pages for modstars, and themes for modcasts so they aren’t always completely random.