In our ongoing series of top search terms for 2007 (check out Yahoo’s list here), Google released its <a href="Zeitgeist list for 2007 of fastest rising and fastest falling search terms (see below). And guess what? The Google Zeitgiest list for fastest growing U.S. terms is the same as what we reported ten days ago. But Google did release terms for global searches as well. The No. 1 fastest growing search term in both the U.S. and globally this year was ‘iphone.” But No.2 globally was London-based social networking site “badoo,” instead of “webkinz” in the U.S. “Badoo” didn’t even make it onto the U.S. list. Other terms that made the top-ten globally but not domestically: “dailymotion,” ebuddy,” “second life,” and “hi5.”

On the loser’s list: “kazaa,” “xanga,” and “mp3.” But don’t feel bad for them. They are in good company. No. 2 on the falling list is “mozart.” That’s right, “mozart.” I have no idea why that is on the list either. But my prediction is that “anna nicole smith” will be joining the diminutive Austrian in 2008. 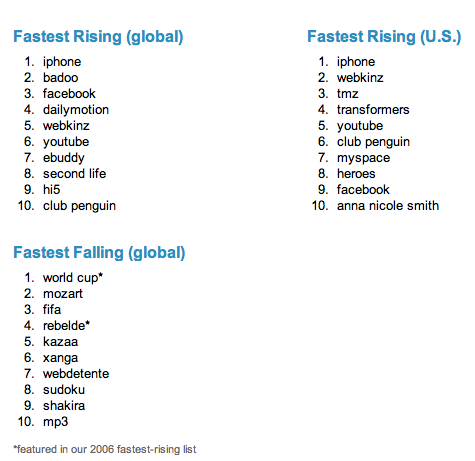