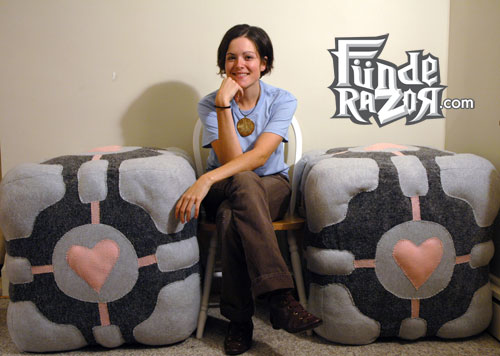 Feeling charitable? In the Denver or New York City areas? Check out the Funde Razor, a fundraising event for Penny Arcade’s Child’s Play yearly charity. Head to the location, buy some drinks, enter a raffle, play some games, and the proceeds go to outfitting sick kids with good stuff while they’re in the hospital. You can’t help but do some good here, and when the prize is one of two full-size plush Aperture Science Test Facility Weighted Companion Cubes? That’s a grand slam. You might even say it’s a triumph.

The Razors are at Barcade in Brooklyn at 8PM NY time, and at the Walnut Room in Denver at 6PM Denver time. It’s $10 for entry. If I were anywhere near these places, I would be there AND be square. Cute girl who made the cubes not included in prize package.