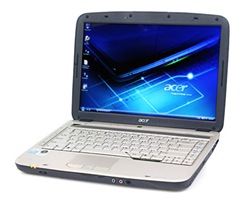 PC Magazine recently reviewed the $600 Acer Aspire 4710-2013 and they liked it, saying, "Cheap laptops are usually synonymous with heft and ugly designs. The Aspire 4710-2013, happily, is an exception." It uses an older Intel Core Duo processor and only has 1GB of RAM but features a dual-layer DVD burner, large hard drive and speakers that "sound better than you would expect on a $600 laptop".

At the Acer Global Press Conference a few months ago, I came away with the distinct impression that Acer’s going to be aggressively producing inexpensive laptops with an emphasis on non-fugliness as it tries to expand its worldwide market share. We’ll start seeing more and more of these "Gemstone design" laptops priced against bargain laptops from competing brands in the hopes of grabbing consumers who don’t want to spend a lot on a notebook but want something that looks nice enough to actually use in public.