One of the favorite things I like to hear from developers when some horrible and embarrassing bug manifests itself is “It’s a feature not a bug.” It’s a joke of course, but it’s unlikely Microsoft developers will be doing any joking around as they try to control the damage from a recent bug that autodeletes users’ most important files.

Microsoft FolderShare allows users to back up and synchronize files across multiple machines. Generally only important files, that need to be accessed regularly, are synchronized. The bug, which Microsoft told users about via an email and notice on the site after they fixed it on December 7, auto-deleted files that contain special characters (such as accents, trademark signs, etc.)

“Do NOT delete files from your FolderShare Trash folder until you are certain that you were not affected by this problem” Microsoft said to users. The bug occurred beginning on December 3 and was fixed on December 7.

This isn’t hugely damaging (most files were unaffected), but Foldershare is under significant competitive pressure from a horde of startups like Switzerland-based Wuala. Losing user trust from hiccups like this will only help those startups get market share. Perhaps, like FolderShare, Microsoft will eventually buy one or more of them, too. 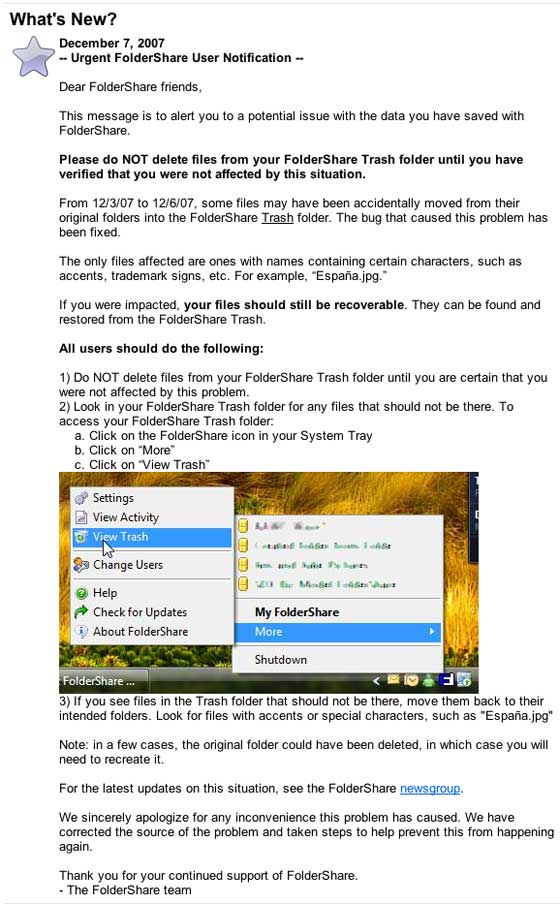