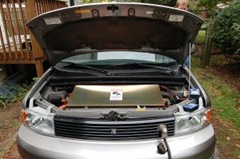 Faculty members at the University of Delaware have built an electric car that’s capable of selling back excess stored energy to utility companies depending on the demands of the electrical grid.

"A car sitting there with a tank of gasoline in it, that’s useless. If it’s a battery storing a lot of electricity and a big plug that allows moving power back and forth quickly, then it’s valuable," said Willett Kempton, who’s been developing the technology, known as V2G (vehicle to grid), for more than a decade.

It basically puts your car to work while it’s parked, helping to balance the energy grid. Electrical utilities price electricity based on demand so during the daytime, for instance, energy costs more than it does in the middle of the night. Your car would be able to feed energy back to the grid during the day and then charge itself up at night. You’d set a minimum charge level (i.e. don’t fall below a 50% total charge) and then allow any excess to be sold back to your utility company.

The car itself is currently a modified Toyota Scion. It produces no emissions and can reach 60 miles per hour in seven seconds with a top speed of 95 miles per hour. It’s got a range of 120 miles on the highway or 150 miles in the city and the battery is being tested to last about five years or 50,000 miles before it needs to be replaced.