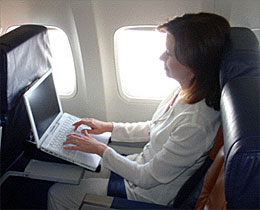 The Web is coming to your airplane seat, real soon. And not just e-mail and IM on one JetBlue plane. Starting in March, I am told, American Airlines will start offering Web access on-board, followed shortly by Virgin America. Both will use an air-to-ground system from Aircell. (Boeing’s failed Connexion broadband in the air service, in contrast, was an unwieldy satellite system). Alaska Airlines also has plans to offer Web service next year, but I believe that is a satellite-based system as well.

Inside the plane, some of these will be Wi-Fi. Newer planes, like Virgin America’s, that already have Ethernet jacks at every seat, will have both wired and wireless connectivity. Both plan on charging $10 a flight for Web access. I know I’d pay that. But it could be worth a lot more to them to offer it for free, and use it to build loyalty. Virgin America, in particular, has more to gain by offering its Web access for free. I personally have already started flying Virgin America (AKA the Blogger’s Airline) just because I know I will have an electrical plug no matter what seat I get. If I could get free Internet access, I wouldn’t fly any other airline. I am sure there are enough other frequent flyers out there who feel the same. Enough to keep Virgin America’s planes full, which is the only way you make money in the airline business, not by squeezing another $10 from each passenger with a laptop or an iPhone. They can also subsidize the Internet access with ads.