While Facebook’s Beacon program has been drawing the ire of many people because of the privacy issues surrounding it, advertisers might be equally concerned about whether Beacon is inflating Facebook’s overall visitor and traffic numbers. Yesterday, Compete reported that Facebook’s unique visitors went up 20 percent in the month of November, after a controversial dip in September and practically zero growth in October. Could the increase have had anything to do with the launch of Beacon in early November? 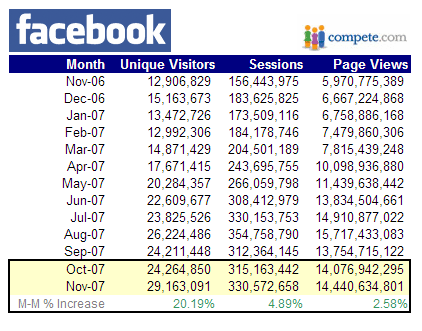 In a word, yes. Every time someone visits a Facebook Beacon partner (there were 40 of them at the time of the announcement) and performs a pre-defined action like writing a review or rating a hotel, a little Beacon toast pops up alerting you that your action is being sent to Facebook. That pop-up is actually coming from Facebook, and in some cases may be counted as a Facebook page even though the person seeing it does not normally click through to Facebook. It is triggered by a tag on the partner’s page known as an iFrame, which then tells your browser to load a page from Facebook within the site you happen to be visiting. This occurs even when a non-Facebook member visits that page and performs the same action. In that case, it creates a ghost iFrame, though, because the viewer does not see anything. But data is still sent to Facebook.

I called up Jay Meattle at Compete, who wrote the post, and he confirmed that of the 29.2 million unique visitors Compete counted for Facebook in November, those could also include visitors to Facebook iFrame “pages,” which are really nothing more than a pop-up on a partner site. So, for instance, if you write a review on Yelp, a Beacon partner, a JavaScript is executed for all users writing a review (http://www.facebook.com/beacon/beacon.js.php) and an iFrame is launched (http://www.facebook.com/beacon/auth_iframe.php). That review on Yelp can now count as a unique visitor on Facebook.

So how many Beacon iFrames “visits” did Compete mix up in its numbers? Meattle says that 2.3 million people triggered a Beacon iFrame in November. But he wasn’t able to tell me what the overlap is because a portion of those 2.3 million people could have already been counted as Facebook visitors when they visited Facebook previously, and thus would not be counted again. The Beacon pop-up would be treated in that case like any other Facebook page. (That is, after the first one, it would count towards page views, but not towards unique visitors). But remember, these iFrames are triggered by non-Facebook members as well who never go to Facebook proper. That would explain why Facebook had such a huge jump in visitors in November. If all 2.3 million of those iFrame visitors were counted improperly as part of Facebook’s total, that would account for nearly half of the 4.9 million jump in unique visitors measured by Compete.

Another strange thing about the Compete numbers is that they show unique visitors going up by 20 percent but page views only going up 2.58 percent. That could be due to lots of things, like Facebook users doing more stuff with apps on a single page, clicking off to Websites controlled by application providers, or Facebook just becoming more efficient in not making you click around as much to do the same things. But I wonder if that is partly Beacon-related as well.

Will wel see the same inflation in comScore’s November numbers when they come out next week, or in other measuring services such as Quantcast, HitWise, or Alexa. The folks at comScore assure me that they filter out any traffic or pages not requested by users such as pop-ups, so it might not be an issue for them. I don’t know how the other measuring services treat iFrames. But in an age when Websites are interchanging so much data and so many actual applications, where one begins and the other one ends is becoming blurred. Do page views even matter anymore? Do uniques? Maybe it is time for some new metrics. 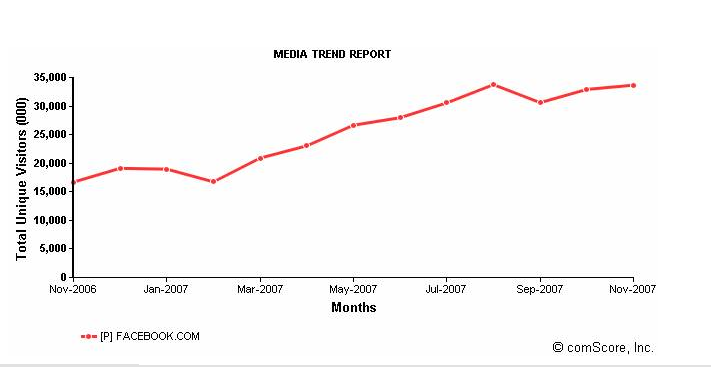