As the phone becomes a data device, figuring out a better way to input data and interact with the phone will become crucial. Tiny keyboards are sub-optimal. Touch screens smudge up. Voice commands? Please. What about waving to your phone? That’s what Sony Ericsson is suggesting in a patent application filed today. It would use the phone’s camera to capture hand gestures, which could then be interpreted as navigation instructions. It seems rather obvious tome. I’ve seen similar demonstrations using cameras and laptops. The fact that the camera is on a phone does not seem particularly novel. But then, as the Biggman at CrunchGear says:

Patents are ideas officially recorded by companies to ensure no one else gets them first. They are not “roadmaps” nor is there any proof that they will ever be implemented in any actual device at any time.

He also worries about real-world limitations of such technology, such as the cat walking by and somehow activating the device with her tail. 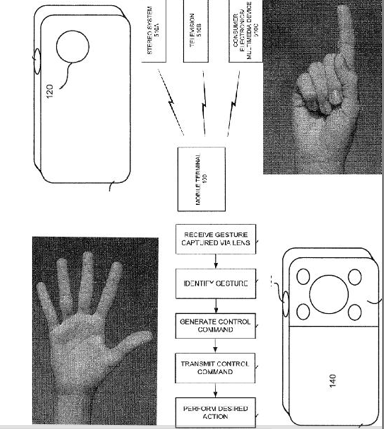