We’ve made a lot of mistakes building this feature, but we’ve made even more with how we’ve handled them. We simply did a bad job with this release, and I apologize for it. . . . Instead of acting quickly, we took too long to decide on the right solution. I’m not proud of the way we’ve handled this situation and I know we can do better. 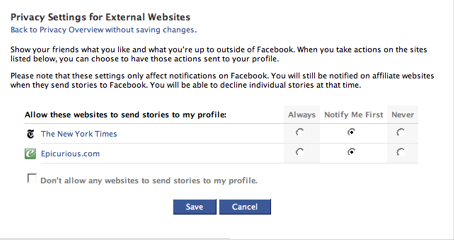 He also announced a new privacy control that lets Facebook members opt out of Beacon completely. (Before, you had to opt out on a case-by-case and site-by-site basis).

These were the right moves. Even if Facebook members have not yet started flocking to the privacy settings page in reaction to Beacon, the bad PR was not going away. It still might not go away, but at least Zuckerberg is addressing the issue straight on. In his post he explains the thinking behind Beacon:

When we first thought of Beacon, our goal was to build a simple product to let people share information across sites with their friends. It had to be lightweight so it wouldn’t get in people’s way as they browsed the web, but also clear enough so people would be able to easily control what they shared. We were excited about Beacon because we believe a lot of information people want to share isn’t on Facebook, and if we found the right balance, Beacon would give people an easy and controlled way to share more of that information with their friends.

But we missed the right balance. At first we tried to make it very lightweight so people wouldn’t have to touch it for it to work. The problem with our initial approach of making it an opt-out system instead of opt-in was that if someone forgot to decline to share something, Beacon still went ahead and shared it with their friends.

Some of this may just be Zuckerberg’s handlers an investors telling him he has to flog himself in public. When he announced Beacon and Facebook’s Social Ads initiative and was asked at the press conference whether he thought people would be put off by Beacon, his attitude was very different. “It is an ad-supported service,” he pointed out. I was in the room. His tone definitely implied that Facebook members are getting an awesome service for free, so they have no right to complain about how Facebook chooses to advertise to them. But that is such a walled-garden mentality.

Maybe Zuckerberg is finally beginning to realize that he does not have permission to track his customers indiscriminately across the Web. Nobody does anymore. Other Websites and advertisers take note: this could soon be you. Facebook is taking the heat because it is big, high-profile, and pushing the envelope. But it is not alone.