We get a lot of Digg-style sites in our submissions at TechCrunch, most of them are alike and don’t get covered. Future Scanner wont win any awards for its looks but like any interesting and/ or good site its the content that ultimately counts.

Future Scanner brings social news voting to future predictions; think Digg but only for stories about the future. Content is organized by year and by category and is claimed to be the first “broader media platform dedicated to the future.”

The CEO of Memebox (the company behind the site) Jeff Hifford has lofty goals for Future Scanner, saying that “From a broader perspective, our goal here at MemeBox is to create a rich, interactive playground that allows people to explore the future and see how accelerating technological change will increasingly affect their everyday lives.”

The content listed on Future Scanner is surprisingly broad; whilst many would automatically think gadgets would dominate a site like this, there were articles on urban planning, culture and entertainment among others.

This site won’t appeal to everyone, but those with an interest in the world of tomorrow may find enjoyment in the service that Future Scanner provides. 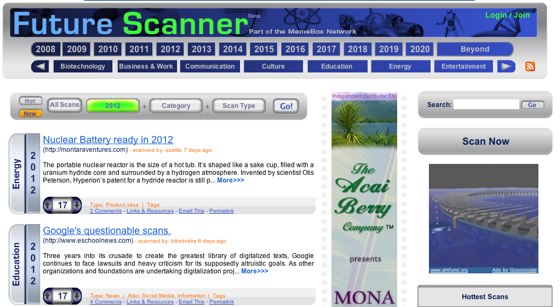