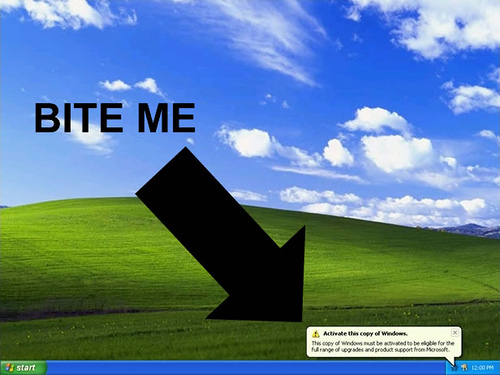 When SP1 drops for Windows Vista, gone will be the WGA kill switch that turns off your PC if you don’t have a genuine copy of Vista.

Beginning with the final, released version of SP1 next year (the modified WGA code will be missing from all but the most exclusive of SP1 betas), Microsoft plans to roll back WGA to its original format as a series of notifications that nudge and nag but don’t block access to any installed programs or Windows features.

Whereas previous version of WGA blacked out your screen and only allowed you to surf the web, the new version will just nag and nag until you decide to be a good person and call Microsoft. SP1 also plugs two Vista cracks, the BIOS hack which convinces Vista that it is running in OEM mode and the date hack which sets the activation deadline to some time in the far future.