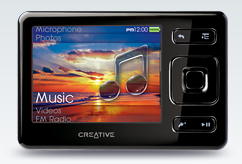 I’m not saying people will be rushing to pick up a Zen or anything, but it should be noted that Creative has announced the world’s first flash-based 32GB PMP and it’s the size of a CC. What else does $378 get you? That’s not a type typo, either, it’s $378. That’s cheap. Super cheap for 32GB of flash memory. A 2.5-inch display, 30 hours of music playback, five hours of video playback and an SD card slot. Holy balls! Could the 32GB iPod Touch be on its way? Maybe, just maybe, at MacWorld in January? Please say it’s true, Apple.