Knocka.tv ends speculation today by alpha launching an Internet television network. As a TechCrunch exclusive, 1000 of our readers will be the first users to gain access—the sign-up form is at the bottom of this post.

The concept is a multi-channel Internet broadcast network that features both professional and user generated content. Knocka packages the content prior to broadcast with promos, branding, transitions, credits, etc. The participatory angle comes into play by having users determine the playlist and in the future actually take part in live shows.

By no means is Knocka inventing a new category. Similarities can be found in offline Current TV, and in online maniaTV.com. In much the same way that news is democratized by Digg, Knocka is attempting to empower users to create and determine television broadcasting on the Net. 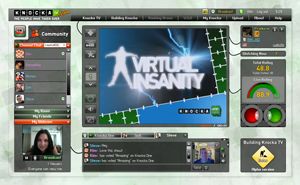 This leads to what I view to be Knocka’s main problem. While the offering is indeed compelling, at the same time it’s also complicated to the point that users will have a problem comprehending its nature, let alone explaining it to others. There are many moving parts to Knocka, so do your best to follow:

Professionals and amateurs upload videos that enter a pre-screening pool where they are rated by users. The top rated ones are broadcasted, but not before Knocka packages them up and creates the actual playlists, which is done 24 hours in advance. Once broadcasted, users can again rate the individual videos, or shows. Individual videos can then be selected to be seen independently of their original show. While all this is happening, users can communicate with each other through chat rooms, private text messaging, and by webcams. Got that?

Basically, instead of focusing its appeal to a single group, Knocka is trying a bowling alley approach by attempting to appeal to the entire food-chain: Producers, influencers, communities and viewers (passive and participatory).

Knocka is kicking-off with 8000 videos by 600 producers, including Break a leg, aniBoom, Ministry of Sound, and Fashion TV. The three debut channels are:

Knocka is 100% browser based and there will be no embedding. On the cosmetics front, Knocka scores high marks with me. The frontend was done in Flex and while the interface requires some fine-tuning, all-in-all it looks good. I also really enjoyed the packaging which took me back to when MTV defined “cool” and actually played videos.

An interesting tidbit about Knocka is that it marks the return of ICQ co-founder Sefi Visiger back to the startup scene. He took a major leave of absence since the big exit back in the day.

It’s fairly obvious that massive participatory events around video will happen sooner or later. Knocka still has work to do, but it comes out of its corner for round one with potential.