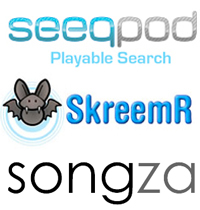 Music search engines are just one of the many ways to get free music on the Internet (BitTorrent and MP3Sparks, formerly AllofMP3, are other popular ways). But for some users they are a near perfect way to listen to music on demand, and/or round out their music collection.

Three that we’ve been tracking are SeeqPod, Songza and Skreemr.

All three index the web, or parts of the web, looking for music files that people have uploaded to servers. Users search by artist or song. MP3s or other non-DRM sound files with metadata matching the query are served as results.

Unlike sites like LaLa, Imeem and Pandora (and many others), which are all trying to play by various RIAA rules to deliver music to users, music search engines generally don’t pay royalties of any kind. The music itself is never on their servers, so they have significantly less copyright exposure. More on that below.

Of the three, Seeqpod is the most useful. It has an index of 8 million individual songs, auto-spell checks queries to find common misspellings, and allows users to create playlists. Seeqpod also has embeddable players, and will try to find music videos of songs you are playing. Seeqpod, by the way, was originally a project of the Lawrence Berkely National Lab.

Songza also allows users to create playlists and provide embeddable players.Skreemr has bare bones functionality and the hit rate is a little iffy. But they have one feature that the others do not – a direct link to the file on the third party server. That means downloading the song to your hard drive is just a right mouse click away.A fourth company, Deezer, changed its model in the face of litigation in France.

There’s no reason to mince words here – the music these sites are playing is almost always copyright infringing. But it’s distributed on servers unaffiliated with the search engine itself, making it effectively impossible for the RIAA and its international equivalents to do much about it other than try to force the largest infringers to remove the content. That’s because there is little recourse against the search engines themselves.

None of those legalities affect the search engines, though. It’s unlikely that under current U.S. law the RIAA can do anything at all to stop them.

Current case law gives a lot of leeway to search engines. I spoke this evening with Andrew Bridges, counsel for Google in Perfect 10 v. Google. In that case, Google was held not held to be infringing the copyright on images just by displaying a thumbnail of the image in search results.

The same arguments are valid with the music search engines, says Bridges (with the caveat that he’d have to look much more closely at the specific facts of any case).

So for now the search engines are free to link to infringing songs, and even stream them on their site. Just so long as the songs themselves are never stored on their servers. That’s good news for Deezer, Seeqpod and Skreemr, and the users who’ve come to rely on them.