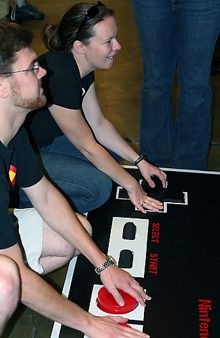 Here’s a giant NES controller for your amusement. It has a working Nintendo Entertainment System inside of it. The buttons on the big controller are functional but due to its size, you need a friend to help you navigate around the Mushroom Kingdom. Sounds sort of fun, no? Maybe it’d be a hit at some sort of party.

I seem to remember finding something a few years ago that was basically a normal size NES controller (actually maybe it was an N64 controller) that had a bunch of old NES roms loaded onto a chip inside the controller. You just hooked it right into your TV and started playing all your old favorite games. Now that was a good idea.

Video after the jump…