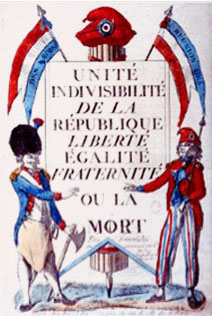 French pirates—not the Spanish Main kind, but the ones using BitTorrent to download movies and such—may see their Internet connection terminated if The Man finds them downloading illegally. A proposal that’s fully endorsed by French President Nicolas Sarkozy (and drawn up by the head of French entertainment executive) would see pirates cut off from the Internet after getting caught as little as two times. Sarkozy says he supports the measure (as do the French entertainment industry and ISPs) because he wants to see French artists able to live off their work. That said, not everyone in the French Government supports it, with a couple of deputies in Sarkozy’s party saying that the move “creates a truly exceptional jurisdiction for downloaders contravening the principle of equality before the law.” (Deputies are powerless in the French system, I do belive.)

I have no idea how French cartels work, if there’s an RIAA over there, but the propsed law certainly seems a little harsh. Maybe France needs a Pirate Party of its own, if for no reason than to complain all day long in the National Assembly.