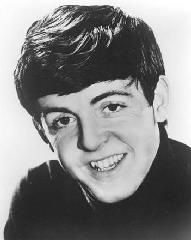 I won’t be as brazen as the AFP to report that Paul McCartney saying "I’m pretty sure it’ll be happening next year" (in regards to Beatles songs being put on iTunes) to mean that Beatles songs WILL be on iTunes in 2008. Paul McCartney says a lot of things and, when all is said and done, he, like most musicians, has very little control over what happens to his music. Sad but true.

"The whole thing is primed, ready to go — there’s just maybe one little sticking point left, and I think it’s being cleared up as we speak, so it shouldn’t be too long," he said. See? He doesn’t even really know what’s happening with the whole deal.

According to a recent interview in Billboard Magazine, there have apparently been some timing issues and legal problems to resolve. Whatever the case, who cares? You’ve waited this long, what’s another year or two or four? This Beatles-on-iTunes speculation has been dragging on forever. It’ll eventually happen.

Beatles tunes to be available for download in 2008: McCartney (AFP)