Flux, the new distributed social network that was created via a partnership between Viacom and Social Project (formerly Tagworld), has been busy since their September launch.

Flux is a “distributed” social network in the sense that publishers can plug it in around their existing site, effectively bolting a social network onto their existing communities. Viacom continues to add its hundreds of website properties to Flux. But dozens of unaffiliated third parties have joined, too (such as Winelibrary). See a list of many of the participating sites here.

Today Flux launched the first key part of their platform called fshare. In general its a way for sites with video content to allow users to share that content by placing it on other sites. See the 50Cent site for an example, and click on any of the latest videos on the bottom left of the page. Then click on the fshare button. You can then add the video to various social networks, or just add it to your list of favorite content. Friends from any Flux network will then be able to see that content in your “news stream” and add/share it themselves.

Ok, so sharing content in this way isn’t exactly rocket science. But seeing it in action shows the value of a decentralized network where each community has a stand alone community and culture but where members cross pollinate content around the various sites. 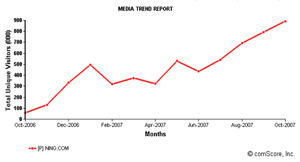 Flux is certainly similar to Ning (which by the way continues to grow rapidly, see Comscore chart). But the approach is different. Ning is drawing lots of users who are creating brand new networks, perhaps tangentially related to existing brands. Flux is all about taking existing sites, even big ones, and turning them both into social networks as well as part of a bigger network of networks. Both might do well – Ning has momentum, but Flux has huge existing partners right out of the gate due to the Viacom relationship.

The key point in Flux’s growth with come when they turn on the self service mechanism and let sites join the network at will. That’s promised for sometime this year, so we won’t have long to wait.