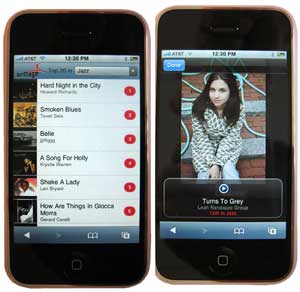 Mzinga isn’t the only new product launching tonight at the Boston TechCrunch Party. Massachusetts based OurStage is debuting a new iPhone site where anyone can listen to top ranked Indie songs as well.

Ourstage, which launched in March 2007, is a site that lets users rank and buy Indie songs. Artists upload the songs, which users then judge – two song snippets are heard and the user votes for which one he or she likes the best. The result is are constantly updated top lists of songs. The top songs overall or by category are then listed on the site, and two $5,000 prizes are given to the top artists each month.

Users can also purchase any song in unrestricted MP3 format for $.99. Currently the artists receive 100% of proceeds, but starting in 2008 OurStage will begin to take a 30% cut.

Now iPhone users can visit the site and stream any of the top songs – just visit ourstage.com from your iPhone to access the custom user interface, which uses Quicktime to stream the music.

OurStage is taking a different approach to ranking Indie music from other startups we’ve covered. Amie Street, by comparison, simply sets the price of every news song at zero and then begins raising the price as the number of downloads increases. Amie Street was recently funded by Amazon. Also see our coverage of Strayform and SellaBand.