Can’t keep up with all those magazines piling up in your mailbox, especially the high-brow ones you thought would make you smarter but never have time to read? Well, cancel those subscriptions and head on over to Brijit, a self-styled “Thinking Man’s Digg.”

There you will find 100-word abstracts on the latest articles from magazines such as The New Yorker, The Atlantic Monthly, The Economist, Fortune, Harper’s, Vanity Fair, and Wired, with links to most of them. The site also covers video from 60 Minutes, Charlie Rose, The Colbert Report, and The Daily Show. Readers vote the best stories up or down, so you can keep up on the ones most likely to come up during a dinner party. You can even get paid to write abstracts, $5 apiece if your submissions are accepted.

Brijit is designed to be a filter for the smart set. But it oddly defines smart only as what’s in print. Where are the blogs? Other than Salon and Slate, very little online-only media is represented. Perhaps that is because Brijit is focussed on long-form narrative, and there is not much of that online. But it makes you wonder whether sifting through the dead-tree titles will be enough to keep readers coming back to this site, or whether they will prefer a broader view of the world.

(Disclosure: I worked at Time Inc. when Pearlstine was the editorial boss there). 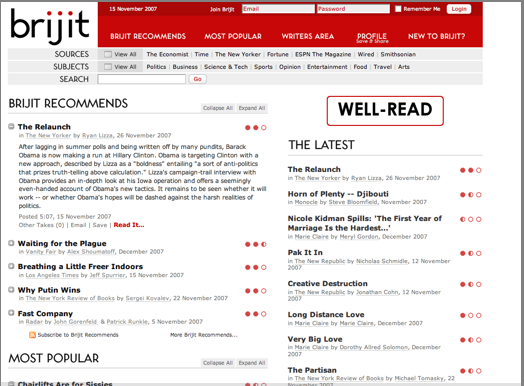