The new functionality will tie in with their existing social events focus, where over 300,000 Going.com members already use the service to RSVP for events. Going.com believes that the service provides a better long-tail targeted service compared to bigger ticket sellers such as Ticketmaster. The service debuts with tickets for Moby in New York tonight.

Competition in the online ticket sales market is fierce however the one stop seamless approach for Going.com’s increasing member base makes for a logical addition.

Going.com’s schwag tied into their “naughty gifts Facebook application” on the other hand is still leaving me a little confused, but then again I’m married with child so I’m probably not in the target market for “tea bagging” and “Blue Balls.” The yellow slip of paper in the picture below is notice from AQIS that the parcel was deemed suspicious by a customs dog and was opened for inspection. I’m not in jail thankfully but I’m sure the “special Brownie” would have raised a few eyebrows in the postal inspection center…or maybe “special brownie” has a different meaning today to the one I recall from my younger days :-) 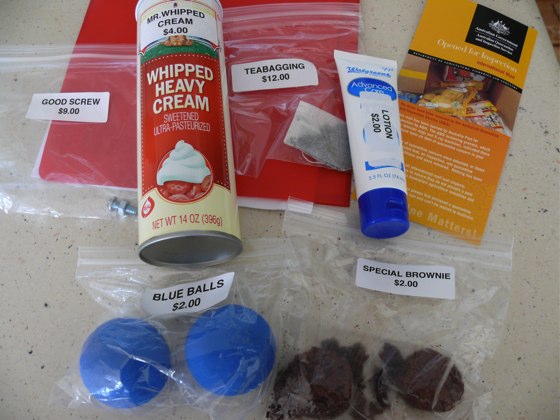