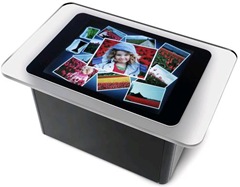 Microsoft had hoped to get its Surface technology up and running by the end of the year. It’s now not going to be ready until Spring of 2008, which doesn’t surprise me a bit. This has been happening a lot lately.

Before you ask me if and why I hate Microsoft so much, let me tell you that I’m typing this using Microsoft software on a Windows Vista computer. I’m not a Mac disciple by any means, although I do enjoy the iPod Touch quite a bit and I used to own a MacBook. But for the most part, I’m a Microsoft guy. I don’t hate Microsoft. I’m disappointed in Microsoft which, as any parent would tell you, is sometimes worse than being mad.

It’s not the Surface technology that I care about. I guess I’m getting a little tired of Microsoft over-promising and under-delivering things, that’s all. Vista was late (and it still doesn’t work), Office was late, and now Surface is late. Everything’s always late. This streak of late releases doesn’t look good to consumers or investors. I need to quit assuming that “end of the year” means “end of the year” and just add 33% to everything.

Bill Gates claims that Surface technology “can be in every table, every whiteboard, every mirror. Give us a 5- to 10-year time frame and we will wonder why our tables used to just sit there and not do anything for us.” I hear that 5- to 10-year claim and now just assume that it’ll be 15 years. Whatever the promise, just add 33% to it.

Bumps on the road to Microsoft’s Surface [CNET]