There are dozens of bookmarking services out there, but most are eclipsed by the size of Delicious. However, Blue Dot’s bookmarking service has remained a favorite of ours because of their ability to consistently innovate their interface. Today, with their re-launch as Faves.com, is no exception. 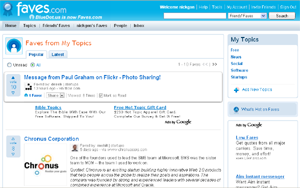 The relaunched site adds features making their bookmark database more relevant and easier to use for anti-social bookmarkers. At the core, it has the same social and privacy features of the old Blue Dot. However, they’ve added a new method of finding trusted links that doesn’t require building yet another social network. The new site adds a topic network that does a lot of the networking and recommending implicitly along with an easy-to-use feed reader for sorting through new links. It’s kind of like Digg and Delicious combined with Google Reader.

The topic network lets users follow and contribute to clusters of links by subject (software, business, Apple, etc.). When submitted, links are categorized by their system and ranked by a score similar to Digg. The score for each link is based on the number of votes, the “karma” of the submitter, and implicit votes such as the number of clicks a link has. Users whose links are more popular in a category, have higher karma.

Users can subscribe to these topics via RSS or through the site’s new link reader. The reader is like a specialized Google Reader for your bookmarks, which can be sorted by popularity, time, and read/unread. Each link lets you easily vote up ones you like or share them with friends. As you scroll through the links, they are marked read and moved out of sight for the next time you return. The reader makes it very easy to sort through dozens of new links in the time it would normally take me to review a few.

The URL change is also part of the Seattle based companies effort to gain greater reach, which they felt was slowed by the relative obscurity of a .us domain. While the site has attracted a significant audience of over 1.1 million visitors a month, the growth rate has stayed fairly level. They’re making a big bet that the new features and .com domain will give a boost those numbers. All in all, they look to be off to a smart start.