Facebook just got a whole lot friendlier for music artists. With the launch of Facebook Ads, it is welcoming bands and musicians to set up their own public Facebook pages where members can sign up as fans. Alas, there will be no standalone Facebook Music service. Instead, Facebook is treating music artists just like any other brands, which can also set up their own Facebook pages, collect fans, and market to them directly.

Yet, when it comes to music artists, one of Facebook’s most popular application developers, iLike, is doing the exact same thing. Already, any band or musician can create an iLike artist page on Facebook that includes their most popular songs (filtered by what your friends like), upcoming concert dates (click on a date and see if any of your friends are going), an artist blog called iCast, related artists, and a Fan Wall where Facebook members can leave notes. In fact, half-a-million have done so. And starting today, iLike will create duplicate versions of these marketing pages for them that work with Facebook’s new brand destination pages. Right out of the gate, iLike will generate 160,000 pre-populated artists pages that the musicians or the labels themselves can modify, or leave as is. 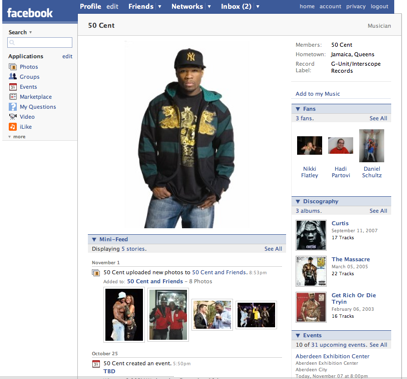 So if you are a music artist, you now have to make a decision: Do you go with the iLike page as your main Facebook page (and take advantage of the nearly 10 million members who use the iLike app), or do you go with your own advertiser page on Facebook? Case in point: the new Facebook page for 50 Cent (shown left) had only three fans when it first went up just after midnight, compared to 1.2 million fans on his iLike page on Facebook.

Well, it turns out that iLike does not care which page artists choose to call their home. Any widget on the iLike artist page—popular songs, upcoming concerts, the iCast blog, even the iLike button—can be plopped into a Facebook artist page (also known as a canvas page). And every link in each of those widgets takes you back to the Facebook application pages that iLike controls.

This is not an unintended consequence. I asked Facebook CEO Mark Zuckerberg yesterday about the potential here for Facebook to be competing with its own app developers. He responded, “What is the effect on app developers if we are making it possible for bands to have music pages? It increases distribution because your app can be on that page.”

Fair enough. But where does that leave Facebook in the fight for the hearts and marketing dollars of the struggling music industry? Already, I like iLike’s chances in this battle. But it doesn’t end within the confines of Facebook.

On Monday, I met with iLike CEO Ali Partovi at the swank Fifth Avenue offices of the investment bank Allen & Co. (Partovi went to high school with Herb Allen III, who lets him use the office for meetings when he is in New York. And, of course, who did we run into in the lobby downstairs, but Ron Conway. That guy is everywhere. But I digress.). Partovi wants iLike to become a one-stop-shop for artists to manage their own profiles and communicate with their fans, whether on Facebook or elsewhere.

To make it easy for them to do that, iLike is also introducing today the Universal Artist Dashboard. From one place, a music artist or record label can set up an artist page on Facebook and iLike.com, as well as information that pops up in iLike plug-ins for iTunes and and Windows Media Player. And since iLike has also joined Google’s OpenSocial effort, these artist pages will soon be exportable to other social networks as well, such as MySpace, Bebo, Ning, Hi5, Orkut, and in iGoogle Web widgets. Instead of having to manage their profiles in all of these places, artists will be able to upload all of their songs, concert dates, and blog posts once to the Universal Artist Dashboard and then spread it all over the Web. They will be able to manage all the messages coming from those artist pages from the dashboard as well.

That is the power of being a widget company—you can insert yourself anywhere. Explains Partovi: “A syndicated effort is always stronger. Rather than try to bottle up everything in one place, push it out to where people are. That is why YouTube is so successful, because it is pasted all over the Internet.”

Take Avril Lavigne as an example. Her record label could create a Facebook page for her at http://www.facebook.com/Avril+Lavigne, which it hasn’t. But she does have an iLike page at
http://apps.facebook.com/ilike/artist/Avril+Lavigne: 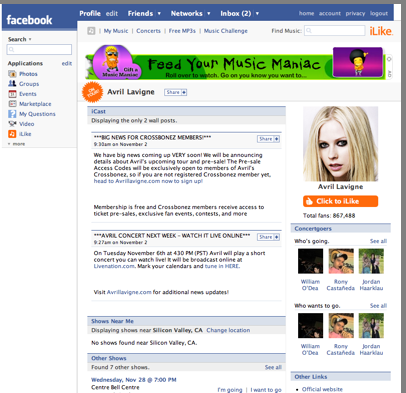 Here is what her page, built from the same widgets, looks like on iLike.com. (Now, just imagine similar pages for MySpace, Bebo, Hi5, and all the other social networks participating in OpenSocial): 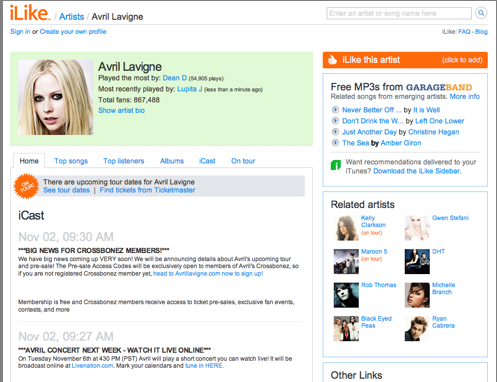 And here is what iTunes looks like with the iLike sidebar (also built from the same underlying data), showing updates from artists in your music library, including a recent tour bulletin from Avril Lavigne at the top: 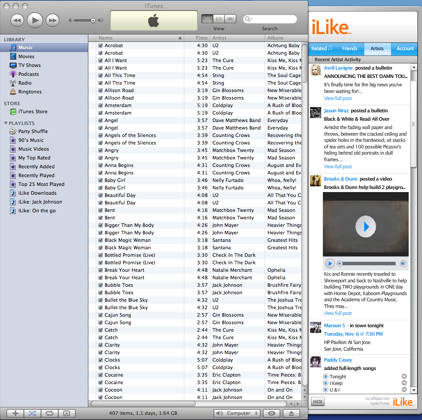