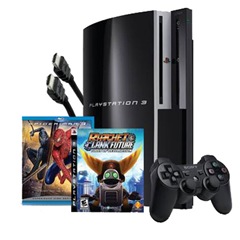 Sure, you can get the 40GB PlayStation 3 console with free Spiderman Blu-ray movie for $399 just about anywhere but at Dell, you can get the same bundle PLUS Ratchet and Clank Future: TOD and an HDMI cable thrown in as well.

This isn’t going to cause mass hysteria by any means but for anyone getting set to buy a PS3 to hook up to a nice shiny HDTV via HDMI, you might as well get some free stuff while you’re at it.