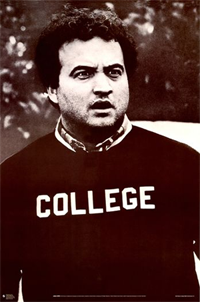 While Alice Mathias may have overplayed the frivolous uses of Facebook for college students in her article called The Fakebook Generation published in the Grey Lady a few weeks ago, she was certainly correct in saying that Facebook lost a certain je ne sais quoi for students when it opened up to the real world last fall.

So instead of trying to take this $15 billion animal head on, as one $222 billion beast is attempting to do, startups might be wise to try capturing the niche that Facebook has intentionally left behind. Of course, there are a handful of reasons to think there will never be another social network that catches on so quickly and so thoroughly with college students. Namely, Facebook itself, which still holds the attention of the vast majority of college students. Personally, I think any company that tries to create a social network for college students faces a very steep uphill battle. But you can’t blame them for trying.

Let’s say you did want to capitalize on students’ (growing?) discontent with the “mature” Facebook; what strategy would you follow? You’d probably want to take a few pages out of Facebook’s own, er, book by restricting membership to users with .edu email addresses, gradually opening up to elite schools, and keeping things stupidly simple. But you’d also have to provide something particularly unique, useful, or entertaining that tempts mainstream Facebook users to jump ship.

We’ve taken a look at the websites out there claiming that they are the next “it” social network for college students. And we’ve got to say: overall, we’re not terribly impressed. Only one stands out – a website called College Tonight – and this because of its novel attempt to bring social networking back into the real world. College Tonight is well-designed and has some features you won’t find in other social networks, such as an area for lost and found items at your school and a place to “drunk dial” with messages you can take back in the morning (if you’re up and out of bed in time). The company behind this site, which launches Monday, also has a set of undisclosed features in the works that tempt us into believing that they might actually appeal enough to college students to survive. We’ll have to write more about them later once we’re more informed.

The other decent site among the bunch is Carmun, a site that encourages students to help each other study. Students post questions they have about essays and tests the are studying for, and others hypothetically help them find the answers and information they need. While the site is attractive enough, I don’t see many students helping other students with the homework no one wants to do.

The rest of them are either really badly designed, ghost towns, gimmicks, or abandoned by their owners (plus, most don’t require .edu addresses to register so what’s the point?). Let’s take a look:

ConnectU – This site was created by the very same Harvard students currently in court with Facebook over whether or not Mark Zuckerberg stole their code. It’s poorly designed, not very functional, and doesn’t look like it’s been updated significantly for a long time.

CollegeHotList – An NYU project that has not yet launched…and probably will never launch (I’ve seen talk on the internet about it that dates back to early 2006).

PlayboyU – A social network built on Ning but branded by Playboy that has only 5,000-some members after launching on August 22. The whole thing feels like a gimmick, and many of the profiles appear to be fake (there’s no way that many attractive people signed up on their own). There’s very little value added by its association with Playboy .

CampusMatch – A romantically-themed college social network that dates back quite a few years and is almost certainly abandoned. It’s too bad too, because a college network with a focus on love/hooking up has a lot of potential.

CampusGrind – This one has a cluttered design and serves more as an information center for teens, with its advice columns, than a true social network.

CampusBug – A site overwhelmed by its sponsorships and overloaded with educational tools like a bibliography creator and flashcards.

CampusCentral – It’s not a good sign when the copyright at the bottom of your pages says 2005. This one’s a ghost town, and tailored to Canadian students, too.

CrushTV – This one’s filled mostly with video and photographic content provided by the site itself. While having videos of babes in bikinis will draw some eyeballs, don’t expect many college students to stay too long.

College.com – Packed with too many extraneous features like sections for news, academics, and greek life. Plus, who wants to rate their professors in their social network?

Uspot – Launched in early 2006…now says “We’ll be back shortly…” on homepage. Not good.

So there you have it. Now who’s going to step up to the plate and give college students an attractive alternative to Facebook? As you can see, you won’t have much competition aside from maybe College Tonight. So get on it, my collegiate friends.