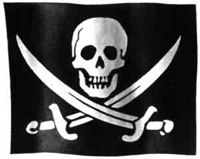 Big TV is close to clueless when it comes to combating piracy. There have been some steps in the right direction. Hulu looks like it might actually end up with some limited appeal, and CBS and ABC are heading in the right direction with their respective online offerings (HD shut down aside). However big TV still really doesn’t get it: BitTorrent continues to thrive like it never has before, dishing up the latest and greatest of American television to an ever increasing audience. Here’s a few tips the American television networks need to absorb

1: It’s all about choice

NBC and Fox, Hulu may have opened with reasonable reviews but it’s still a train wreck when it comes to combating piracy. Where do we start? No downloads for one. People want to take their media with them, and be able to play it on devices such as the iPod. Apple may not have been paying you what you wanted NBC, but its a lot more than the hundreds of thousands, perhaps even millions of folks downloading your shows off BitTorrent are paying you, some of who were previously paying iTunes customers. Big TV needs to provide their shows in a variety of formats to suit as many people as possible..which really isn’t that hard.

If Hulu is in part about combating privacy by providing a legal, ad supported alternative, why does it block anyone from outside of the United States (and possibly Canada) from playing the content? It’s all about international distribution deals, the crappy deals that mean that viewers in Europe and Australasia can sometimes wait 2-3 years to view content broadcast in the United States. This delay is the reason 59% of the French watch television on their computers. You want to dramatically reduce piracy? Then open up your content to the world. The international content partners will not be happy with this, but pay them a cut of the advertising, in the same way Fox is already doing with affiliate stations within the United States. Like NBC and iTunes, the opportunity cost of not providing this service is zero revenue in an international context with direct views, and declining revenue over the longer term as non-American audiences watch less and less American television via FTA or cable. Take what you can and provide a legal alternative to your international viewers. People are willing to deal with advertising for a legal alternative when the legal alternative is available and it is easy to access..particularly when it’s easier than illegal alternatives.

New episodes on Hulu will be available to view for 5 weeks, and not a day more. WTF? What if a consumer hears positive word of mouth 6 weeks after a series has started and wants to watch from the beginning. In NBC’s case no iTunes, no Hulu but yes, it will be on BitTorrent. Memo to big TV: let your consumers decide how long TV shows should be available as opposed to imposing arbitrary restrictions. You’re selling advertising based on views, what difference does it make if the show is available for 6 months instead of 6 weeks, aside from your DVD DRM infested show season sales…which is really what this is about.

4. Stop treating your audience as if it were stupid

Your audience is increasingly turning to alternatives because of your restrictive practices, and because of the quality of what you are producing. What’s the latest shows in development: Law & Order Special Parking Infringement Unit and CSI: Timbuktu? People are downloading more and more international content because of the complete garbage you now make. If you seriously want to win the hearts and minds of the switched on generation, you need to follow the first three points above, then start producing some decent content as well.